At one of my work places, we discovered two incidents of fraud. First was an employee was inflating his travel bills. Our accountant, who reviewed travel statements, grew suspicious when he felt that the room rates were not comparable with room rates charged by other hotels in the same area. He called the hotel and discovered that the field officer was sharing cash with hotel staff to inflate his bills. In another instance, it was surprise cash check that led to discovery of difference of cash in cash box and in cash book. The cashier had taken Rs. 700 for personal use with the plan that it would be put back the next day.

Most business men take such instances of fraud as anecdotal and believe that they are not vulnerable, primarily because they have old employees whom they trust. But the fact is fraud is very prevalent in business as found in some surveys across companies. The frauds could be both internal or external. 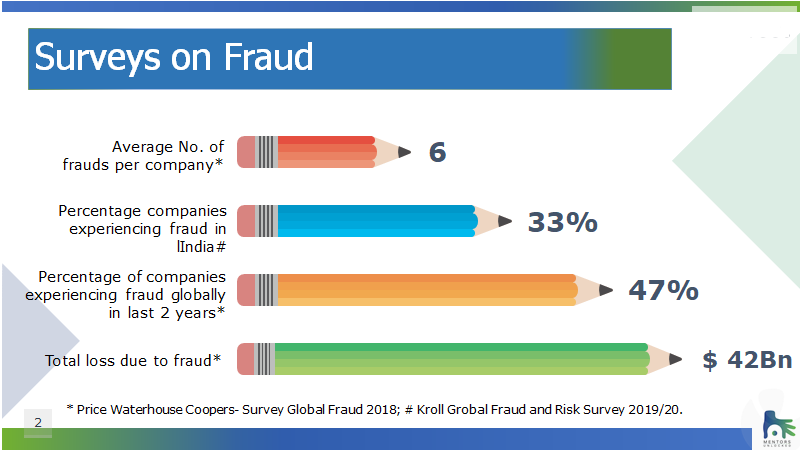 Some of the common areas of fraud are

Smart managers recognize the risk of fraud and take preventive actions to strengthen their systems and reduce their vulnerability/ risk. For example, a second-generation entrepreneur who graduated from renowned University and runs IT software company hired us to review his Order to Cash cycle. The company had three divisions, namely, Contract Software Development, ERP and a SaaS platform. Each division had its own head. The CEO/ Owner did not have confidence in correctness of revenue numbers and was not sure if they matched with the level of effort. On analyzing the process, we discovered that all the authority in ERP, that is closing contracts with customers, issuing licenses and collection were concentrated with the Division Head. The licenses were issued through software and numbers were encoded making it difficult for anyone to figure out how many licenses have been issued. One of the use cases we developed was of Division head being under pressure to meet with his monthly Sales target. The division head could have reached an informal understanding with client of contracting for 8 licenses but unofficially issuing him 10. The person may not do it, but possibility exists. We recommended delegating process of issuing licenses to finance and accounts. Finance and Accounts could only issue licenses after confirming receipt of license fee.  Segregating responsibilities into two different functions or persons within the same department is a common method to prevent frauds.

Strengthening systems and improving internal controls is one of the most effective method of reducing risk of fraud. This comes in with pain of resistance from employees who may feel that their authorities or responsibilities are being taken away from them. The company may want to look at best practices within its industry and in other industries, not only to strengthen its systems but also to learn from experience of others in managing change successfully.

Get A Free ERP Consultation
No Thanks